How do chocolate goodies keep their sheen and creamy texture, even while sitting on store shelves? Increasingly, the answer is palm oil (and palm kernel oil), the world’s most widely consumed vegetable oil[1]. In our report Rethinking Food and Agriculture 2020-2030, we discuss how precision fermentation (PF) is rapidly improving in cost and capabilities so that it could be used to make any protein at speed and scale. But PF is not just about protein, in fact a wide variety of molecules can be made via PF, including those found in palm oil. 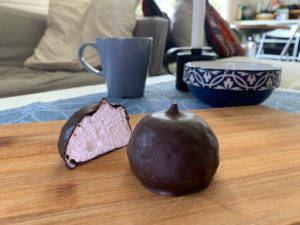 Store-bought chocolate cream balls, which the author was forced to purchase because he noticed the label said that the chocolate glaze contains palm kernel oil. [photo by Bradd Libby]

Palm oil is not just found in chocolate. It’s in a bewildering array of other foods, from cookies and ice cream, to bread, noodles, ready-to-use pizza dough, margarine, oatmeal, breakfast cereal and even baby formula[2]. And it’s in not just foods, but other personal consumer goods like toothpaste, shampoo, lotion, soap and lipstick.

Palm oil has many characteristics that make it desirable for use in these kinds of products: it has a neutral flavor, a long shelf-life and a high melting point that makes suitable in frying, cooking and baking, and that also allows it to substitute for more-expensive animal fats. It is also economically attractive compared to other crops: it has the highest yield per acre of any major oil crop and oil palm trees do not require much in terms of fertilizer or pesticide, helping to make the resulting oil cheap, about $500-$1000 per metric tonne.[3]

According to the World Bank’s records of monthly commodity prices, palm oil or palm kernel oil have been the cheapest vegetable oil among coconut oil, groundnut oil, soybean oil, rapeseed (canola) oil and sunflower oil in 197 of 211 months since January 2003, the earliest month that the World Bank has reported the price per metric tonne of all of those oils.[4]

In addition to food and household goods, slightly more than half of all palm oil used in the EU-28 countries is as an additive in diesel ‘biofuel’.[5]

Companies like C16 Biosciences (https://www.c16bio.com) have genetically modified microorganisms (yeast) to produce palmitic acid, the primary component of palm oil, in batches that take days to produce, using sugar from food and agricultural waste. C16 estimates that, at scale, their bottom-up ‘creation-based’ method (See Rethinking Humanity‘s description of creation-based vs. extraction-based paradigms) of oil production could be 20% cheaper than palm oil from industrial agriculture.

This is possible as PF is more efficient than plant-based production in terms of resources used. Palm fruits grow in bunches, of which the United Nations’ Food and Agriculture Organization (FAO) estimates that only 21-23% of the mass is actual oil content.[6] Crude palm oil must be extracted from the fruit and ‘fractioned’, like crude petroleum, to separate the crude mix into its purer component parts.

The oil palm tree requires about three years after planting to begin yielding fruit and the tree then has a productive lifespan of 25-30 years. But PF yeast can produce a batch of palm oil in days, allowing production volumes to be ramped up or down quickly in response to changes in consumer demand.

Indonesia & Malaysia currently provide 85% of the world’s supply of palm oil, since the oil palm tree only grows near the equator. But PF palm oil could be produced closer to the final customers, reducing transportation costs and reducing the risk of supply chain disruption.

These add up to a PF product delivered to the customer’s doorstep that could be significantly cheaper than its industrial agriculture equivalent.

Disruption will be fast as it is ingredient-led

All palm oil is used either as a component ingredient in another product, like in a lotion, or as a pure product on its own, for example in a block for use as a frying medium. Both of these favor a rapid disruption in sales when the price of the PF oil falls below that of its industrial agriculture equivalent.

When used in other products, the palm oil ingredient often only constitutes a small portion of the total product. Lotion, for example, might contain 70% water and 30% functional ingredients, of which 5% to 10% is palm-derived.[7] Thus, only 1.5 – 3% of the bottle is palm products. Since this is a small portion of the total production cost to the product manufacturer, it is relatively easy for them to switch it with a lower-cost, more sustainably produced alternative with the final customers not necessarily even being aware of the change in product formulation. Disrupt that 3% of the bottle and you have disrupted that entire lotion market for incumbent palm oil producers.[8]

It is not just the supply of palm oil that is subject to disruption. In early 2019, the European Union voted to eliminate the use of palm oil in biofuels by 2030. RethinkX’s research suggests that the Transport-as-a-Service (TaaS) revolution will eliminate nearly all of the demand for diesel fuel (and, therefore, diesel additives) in road transport by that date regardless of regulatory bans. [See Rethinking Transportation 2020-2030] So industrial agriculture palm producers are facing the prospects of both a new way of producing palm oil (PF) and a reduction in demand (due to TaaS and the electrification of transport), simultaneously.

Switching to PF-produced palm oil will have huge implications, both environmentally and economically.

Global production of palm oil has grown dramatically in recent years, from 22 million tonnes worldwide in the year 2000 over 71 million tonnes in 2018, a more than three-fold increase in under two decades.[9] Today nearly 19 million hectares of land are used around the world to cultivate oil palm trees, an area about the half the size of California or about 90% of the combined size of England and Scotland.

But, of course, all of this has environmental consequences. Deforestation to make way for palm plantations results in CO2 emissions, poor local air quality events, and destroys the habitat of orangutans and other wildlife. Shipping palm oil to the places where it will be consumed causes more CO2 emissions, and in many cases, the palm oil itself is burned, causing further CO2 emissions.

Since PF production can be located anywhere, it is likely to be situated close to the supply of food and agricultural waste that serves as the input and close to the consumer product manufacturers who purchase the oil. But the increasing use of palm oil globally has benefited the economies of Indonesia and Malaysia, where its production employs more than 4 million people, many of them smallholder farmers who could find their palm plantations economically unviable.

Problems are often separated from their consequences in time and space. We have seen how the choice to drive to a shop and buy a box of chocolate cream balls could put pressure on smallholder farmers on the other side of the world to cut down the old growth forests that are homes to dwindling numbers of orangutan to make way for oil palm plantations.

But this means that solutions can be distant from the problems they address, too. If the trip is made in an electric vehicle, and the palm oil produced by precision fermentation, then there might not be any effect, and the chocolate cream balls could taste very sweet indeed.

[9] Our World In Data, https://ourworldindata.org/agricultural-production#oilcrops