Public perception can be a fickle thing. Behaviours, products, practices and technologies go in and out of favour all the time, and over the years, the morals and values of the majority change. Social acceptance of homosexuality, women voting, or racial integration was once deemed unimaginable but is now ubiquitous – a social license was granted. On the flip side, some practices that were once perfectly reasonable like smoking indoors, drinking alcohol while driving or allowing dogs to poop in the middle of the sidewalk now seem shocking, ridiculous and are no longer socially acceptable – the social license was lost. Both of these are ‘self-reinforcing’ processes – so they can take a long time to snowball, but when a tipping point is reached, the change can happen very quickly. 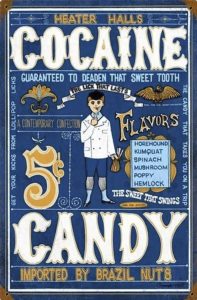 Heroin and cocaine used to be common in household products like Coca-Cola and pharmaceuticals and were even given to children. Then they lost their social license.[1],[2]

How Social License is Gained

Public perception, along with the behavior and regulation changes that come with it, is a driver of disruption. It acts as a feedback loop that when compounded with other drivers, like regulation, investment, and scale of production, accelerates the adoption of a disruptive product, technology or system. Fundamentally though, disruptions are caused by economics. When a new product, technology or system arrives that is an economically viable alternative, i.e. dramatically better, cheaper and more effective, disruption is inevitable. 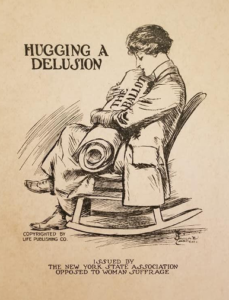 With women’s suffrage once referred to as a delusion, public perception has changed to the point where women have not just earned the right to vote but have reached the U.S. presidential ballot on 4 occasions – Geraldine Ferraro, Sarah Palin, Hillary Clinton and Kamala Harris (three times over the last 12 years).

Early on, it can be hard for many people to recognize the disruption. All they see are barriers – reasons they believe the disruption won’t happen. “People won’t like it, and won’t want to switch”, “the market is too big to overtake”, “People like it the way it is”, etc.

Precision fermentation is currently at this stage. Public perception might be that it is impossible to disrupt animal agriculture because the industry is too deeply ingrained, too large, people like animal meat too much and food made by microbes is too processed, too synthetic and too “out there”, but like all perceived barriers to adoption, the social license is a variable, not a constant.

The lack of a genuine alternative makes it seem like public opinion is deeply ingrained, but it isn’t. It’s just that when the only two options are to continue operating the industries as they are (perhaps with modest improvement), or accept an inferior or expensive product for the greater good, business-as-usual has proven to be more popular.

With PF, the social license we have granted to the livestock industry to kill animals, use vast amounts of land, water and energy and pollute is eroding, while that of the alternatives is gaining ground. The Impossible Burger, for example, has come down in cost and has improved in quality – we are now on version 2.0. As adoption increases, more companies enter the market, investments increase and talent is attracted to the PF industry, which brings higher quality products at a lower cost, and sets off a virtuous cycle of disruption. Plant-based burgers went from being approximations of cow burgers marketed at vegetarians to being cheaper and superior products aimed squarely at carnivores. 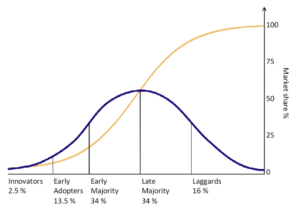 When the product or technology starts to become a competitive option, public perception begins to shift. The shift seems slow at first but will then go much more rapidly than people realize, following an S-curve toward maximum acceptance.

How Social License is Lost

When a social license is lost, it is because people are now able to clearly see the drawbacks of the old product or technology. The way it has always been was tolerated because we did not have the new product to compare the old one to. Few complained about a phone having a cord until they tried a wireless phone. We tolerated rewinding cassette tapes until they tried a CD. We accepted the smell and pollution of car exhausts until we experienced electric vehicles. Despite ample evidence about the costs on society (public health, environmental, social, ethical, etc.) of so many major industries –  most people tolerate them because we prioritize low-cost products and services and maximizing short-term growth, tax revenue and jobs.

When an economically viable alternative comes in to play, this attitude – for individuals, communities and government – changes, inspired by favorable economics.  More individuals and businesses change their shopping habits which leads to changes in their belief system. It is further accelerated by changes in the law, through adding or taking away regulations like bans or taxes that shift incentives (reward and punishment) for individuals and organizations, which further changes collective behavior.

Electric Vehicles (EVs) are probably at this stage. We have known for a century that internal combustion engine vehicles (ICEVs) are harmful to our health, environment and geopolitics. For much of that time, there hasn’t been an economically viable option that is also better for our health, environment and geopolitics. As EV costs drop and their quality and convenience improve dramatically, they have disrupted the high end of the market and changed old perceptions of EVs relative to ICEVs. Add autonomous driving technology and on-demand transportation technologies and EVs bring in a totally new transportation system (transport-as-a-service) that will soon be safer, up to an order of magnitude cheaper on a per-mile basis and save the average family more than $5,600 per year. As we experience this new dynamic, the social license that we had granted the ICEV and oil industries for a century is disappearing. Society won’t tolerate the willful destruction of our air and water, the killing of a million people per year or the geopolitics of importing oil. This shift is happening as we speak and will continue to accelerate over the next few years. 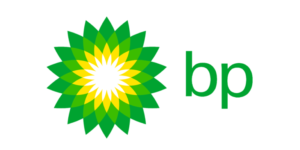 “Oil is increasingly becoming socially challenged, there’s no question about that.”

“There’s a view that this is a bad industry, and I understand that.”

Even the CEO of one of the largest oil companies acknowledges that the social license is shifting away from oil companies. BP has introduced a target for a 40% reduction in oil and gas production by 2030 as well as a $5billion USD per year investment in low carbon projects.[3] The industry as a whole is suffering from a loss of social license as climate change and the environment are at the forefront of political discussion around the world. Targets for carbon neutrality and bans on oil and gas extraction within 10-30 years are growing in popularity to the point where the major companies are concerned about their ability to recruit the next generation of workers.[4]

The social license is slowly shifting away from ICE cars and as it does it creates the political space for policy and regulation both to support the new electric transportation system and penalize the old petrol-based economy. For instance, in early 2020, it was announced that the UK had decided to ban petrol and diesel cars (including hybrids) by 2035,[5] which may even be moved up to 2030.[6]. The Netherlands, Norway, France, Sweden, Ireland, California and others also have announced phaseouts of conventional cars between 2025 and 2040.[7]  The EV disruption will happen because of economics, but the door to the old will be shut by regulation brought by the loss of social license. All of a sudden, it’s no longer just uncool or behind the times to be engaged with the old way of doing things, it’s not right, it’s not safe and in some cases, it may even be criminal.

Social License in the 2020s

At RethinkX, we examine sector disruptions and we think there are quite a few behaviours, processes and products that we consider socially acceptable today that will lose their social license during the 2020s. Can you think of any more?

[4] Elliott, R. (2020, August 18). Oil Industry Frets About Recruiting Its Next Generation of Workers. The Wall Street Journal. Retrieved from here.

1 thought on “The Social License”