Today, we are on the cusp of multiple disruptions in food and  materials. So why now? In a previous blog we discussed how precision fermentation (PF) has been around for 40 years. We know this because we can pinpoint the first product commercialized from PF – human insulin. Human insulin is an illustrative example of how PF created a superior product that led to a rapid disruption of an incumbent product.

Before 1982, the insulin used to treat diabetes in humans came from the pancreases of cows and pigs. However, animal-derived insulin was far from perfect. The few amino acid differences between human and animal insulin caused patients’ immune systems to produce antibodies against the foreign insulin, resulting in the medicine becoming ineffective, and in some cases causing severe allergic reactions. In addition, the insulin extracted from animals was inconsistent in quality and needed expensive processing to reach the level of purity required. Furthermore, the number of animals required to produce insulin were huge. More than 50,000 animals were needed to produce just one kilogram of insulin (enough to treat fewer than a thousand diabetic patients for just one year). Because of this, in the early 1970s, there were widespread fears about limited and uncertain supply, with forecasts indicating that no fewer than 56 million animals a year would be needed to meet growing U.S. demand.[1] 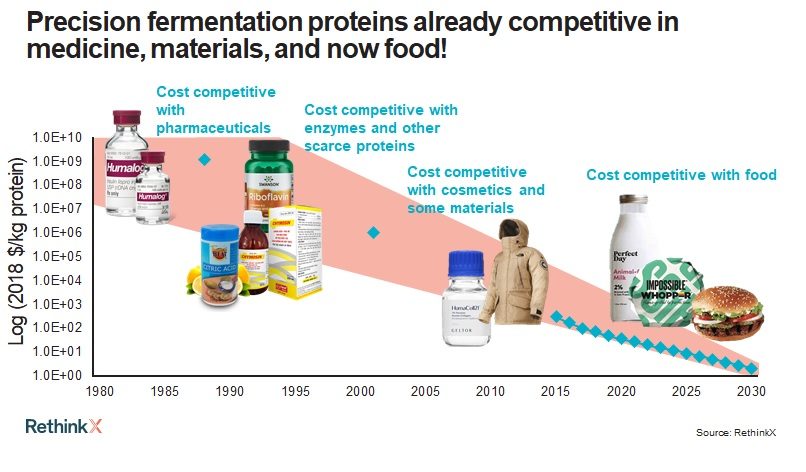 Like many disruptions before, the disruption of insulin resulted from a technological convergence. In 1958, the British scientist Frederick Sanger won the Nobel Prize for Chemistry for developing a method to determine the complete amino acid sequence of proteins and insulin was the first protein sequenced in this way. This method launched an area of science that has been hugely important to the discovery of new medicines. [2],[3] In 1963, insulin became the first protein to be chemically synthesized, and fifteen years later the first protein to be synthesized through biotechnology.

In 1978 Genentech used their recently proven recombinant DNA technology to genetically modify bacteria to produce human insulin. Clinical trials began in July 1980. Here it was found that not only was the synthetic insulin as effective as its chemically identical human twin, it also eliminated the allergies that the animal-derived product caused in some diabetics. Genentech licensed the technology to Eli Lilly who developed the process for large-scale cultivation and called the human insulin Humulin. It was quickly approved by the FDA for commercial use in 1982.[4] This was the first example of precision fermentation.

Although the initial cost of Humulin was about twice the cost of animal insulins, Humulin was more consistent in quality, was better tolerated by the recipients, and managed their sugar levels more effectively.[5] As such, adoption was rapid. We show in the graph below that within 10 years the market share of PF human insulin was over 80%. By 2000, animal insulin made up less than 1% of the market.[6] The market went from one based on extraction from a limited supply of scarce resources to one where technology offered a virtually unlimited supply of higher quality product. The fears of a global shortage effectively disappeared.

But disruptors can also be disrupted. Humulin has itself been disrupted by analogue insulins offering improvements on human insulin (by making it more stable, longer-lasting, and easier to inject) to more closely mimic the behavior of insulin produced by patients without diabetes, improving control of the disease and reducing complications. Today insulin analogues command 90% of the market. So animal insulin was disrupted by the first PF human insulin which was disrupted by PF analogue human insulin. 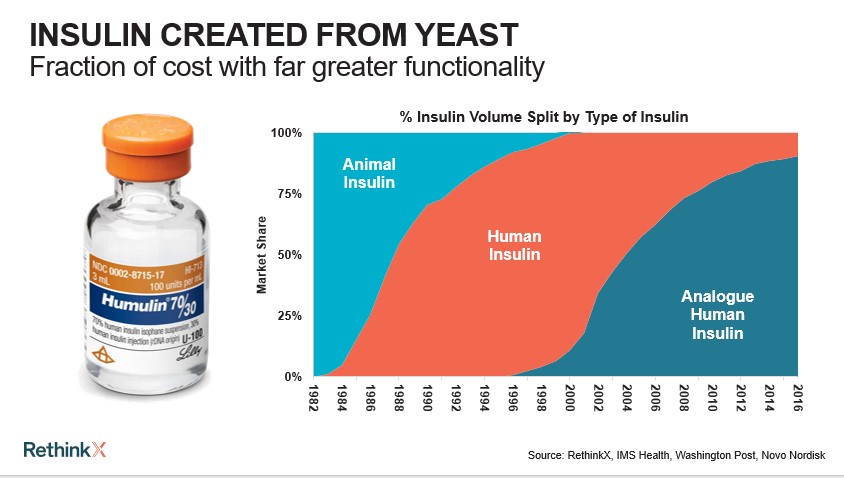 To conclude, insulin provides a case study of how disruptions happen. First, the convergence of technologies allowed human insulin to be produced by PF. Second, while its cost was initially more expensive, it offered improved capabilities (this is called “disruption from above”). As costs came down, disruption was rapid and followed an S-curve.[7]

But cost is not price. Today, while the costs to manufacture insulin have likely dropped exponentially, [8] prices, especially in the US have actually gone up. [9] This dichotomy reminds us that technology disruptions can succeed in delivering innovative products with superior capabilities at dramatically lower costs – but having proper market design and intellectual property regime is important for translating lower costs into lower prices for consumers. As we see accelerated improvement in the cost and capabilities of PF over the next decade, we expect to see entrepreneurs learn the lessons of insulin and bring to market superior products at lower costs, ultimately benefitting humanity.

[2] For a good historical overview of insulin please see here.

[3] Sanger was awarded his second Nobel prize in Chemistry 22 years later in 1980, for discovering a way to determine the ordered sequence of DNA molecules. An adaptation of this method – known as Sanger sequencing – was used to sequence the human genome. He is only scientist to have won two Chemistry Nobel prizes.

[4] For an interesting account on the rapid approval from the FDA by Henry I. Miller. the medical reviewer and head of the evaluation team there at the time see a link here.

[5] Eli Lilly & Company said the initial cost of the new insulin would be higher than that for animal insulins available at the time. ‘’We expect the average daily patient cost to be between 50 and 55 cents a day for the treatment,’’ spokesman Ronald Cusp said. ‘’That compares with between 26 and 30 cents. The long-term desire is that the cost will come down, but at this point we cannot speculate on just how far. The ultimate aim is to make it cheaper, however.’’ Altman, L. (1982, October 30). A New Insulin Given Approval For Use In U.S. New York Times. Retrieved from here.

[7] Adoption at an exponential rate can be visualized over time as an S-curve. See here for more examples of technology adoption rates.

[8] A 2018 study estimates cost of insulin production is significantly cheaper than market prices.

[9] A good overview of why the insulin prices are so high can be found here.