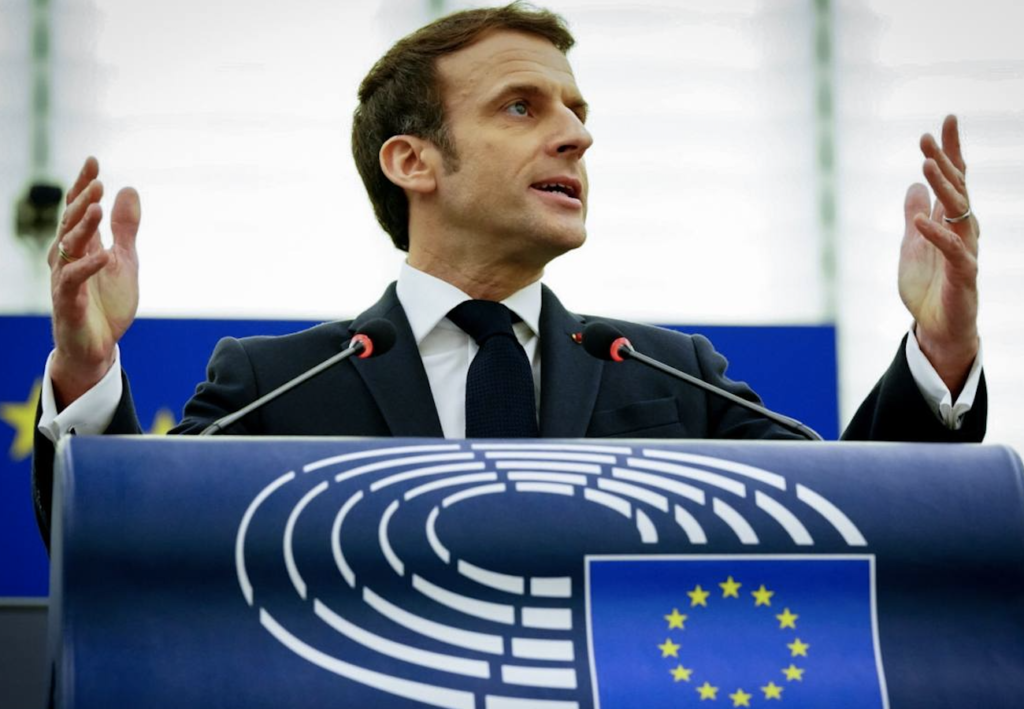 Europe is amid an energy crisis of epic proportions, with a shortage in the supply of fossil fuels causing painfully high energy prices. And today, French President Macron wants to revitalize nuclear to solve this challenge. But if you understand the pattern of disruption, you will see why this might not be so straightforward.

When it comes to energy crises, I’m not just talking about today – I’m also talking about OPEC’s 1973 oil embargo, which sent fuel prices soaring. In its aftermath, French Prime Minister Pierre Messmer announced a proposal, the ‘Messmer Plan’, whose intention was to get France’s electric grid off of petroleum and to generate all of its power from nuclear sources.

But other countries took the lead in turning France’s scientific discoveries about radiation into weapons and civilian electric power. France did not detonate its first nuclear device until 1960, fifteen years after the US, and their first nuclear power plant opened in 1962, about five years after the US and UK had each started their own.

When the current President of France, Emmanuel Macron, was born at the end of 1977, nuclear power still accounted for less than 10% of France’s electricity, behind West Germany, the US, the UK, Switzerland, Sweden, Belgium, and even Bulgaria. But by 1983, France was number one in the world in the percentage of electricity derived from nuclear power and since 1986 it has generated at least 70% of its power each year from its nuclear plants. The bulk of France’s transformation from laggard to leader took only about a decade.

Looking to the future, Mr. Macron recently said that he wishes for the “construction of at least six new reactors by state-controlled energy giant EDF [Électricité de France] by 2050, with an option for another eight”, as well as extending the operational life as long as possible for existing reactors.

Sans doute! No doubt! They have done it before. According to an assessment conducted at the International Institute for Applied Systems Analysis (IIASA), France’s civilian nuclear power build-out “is legitimately considered as the most successful scaling-up of a complex and capital-intensive energy technology system in the recent history of industrialized countries.”

The United States conducted a similarly ambitious program in building nuclear weapons after World War II. According to the Bulletin of the Atomic Scientists, though in 1952 the US had fewer than one thousand nuclear warheads, by 1967, fifteen years later, its stockpile was 31,225, the highest it would ever be.

More than one-third of that net change in warheads came in just two years, 1959 and 1960. Just as most of the French fleet of nuclear reactors was built in the decade from 1977 to 1987, most of the increase in the stockpile of American nuclear warheads happened over a single decade, from about 1955 to 1965. 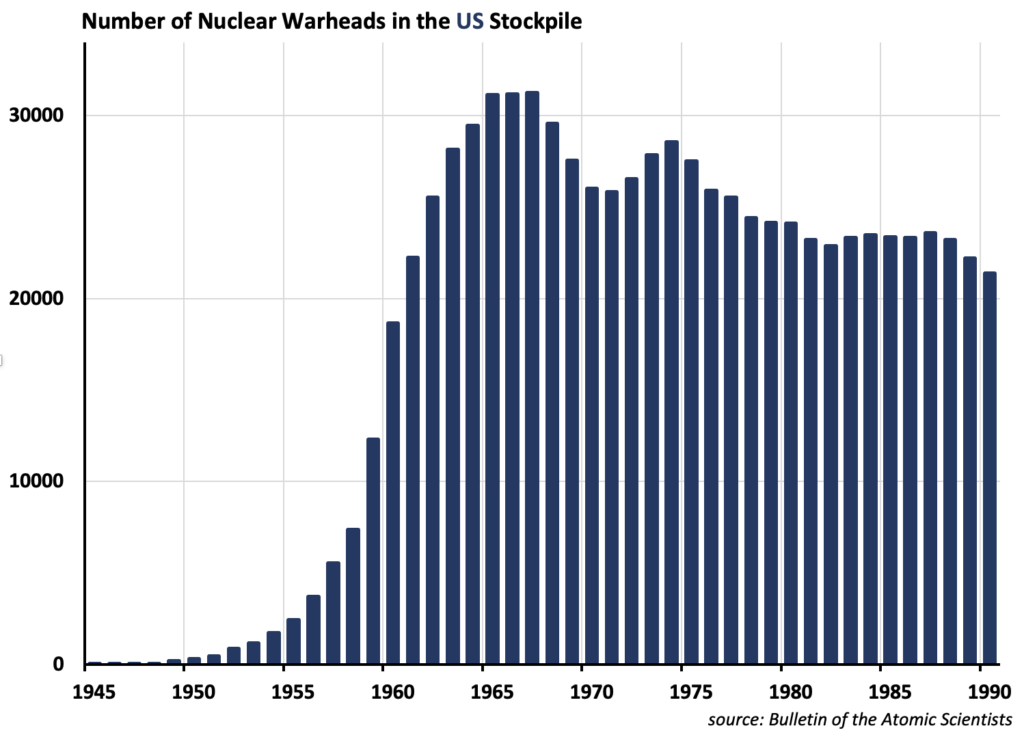 This is quite remarkable. The first self-sustaining, artificial nuclear reaction was demonstrated at the University of Chicago only in December 1942. Less than three years later, the US had functional nuclear bombs. Two decades after that, the US nuclear arsenal had reached its all-time peak. Reasonably speaking, even the youngest people who helped build those weapons at the peak of the stockpile were older than the entire industry they were working in.

When it comes to examples of disruptive technologies, nuclear weapons were one of the largest ever. In March 1945, about three hundred B-29 bombers conducted ‘Operation Meetinghouse’ against Tokyo, the largest conventional bombing ever conducted. Less than six months later, the nuclear missions against Hiroshima and Nagasaki carried one bomb each on board a B-29 bomber, with a few other B-29s in accompaniment. In terms of aircraft used and mass dropped, the atomic bombings were about a factor of 100X smaller than the Tokyo attack, but they delivered more destructive power.

At RethinkX, we have seen this ‘pattern of disruption’ many times before. A new technology is developed which is many times higher in its performance-to-price ratio than the incumbent one.

The new technology, exhibiting an S-shaped curve of adoption, renders the incumbent obsolete largely over a period of about ten or fifteen years.

And in that time, assets became liabilities: as, for example, France’s petroleum-fired power plants were stranded and required decommissioning. Likewise, the last B-29 bomber was built in 1946, as the US military realized it would need to replace its fleet of bombers with a new generation designed and built with nuclear warheads in mind.

So the French could, of course, revitalize their nuclear fleet, but should they?

A lot has changed in fifty years, and Mr. Macron realizes that fact, as his speech also called for increasing France’s installed capacity of solar power tenfold and for building offshore wind turbines, of which France currently has essentially none. It is easy to see why he wants to do this.

In 1976, the year before Mr. Macron was born, the cost per Watt of panels was over $100. A panel large enough to run a single 100-watt light bulb would have cost $10,000. Even by 1977, less than one megawatt of solar PV panels had ever been produced in the entire world. 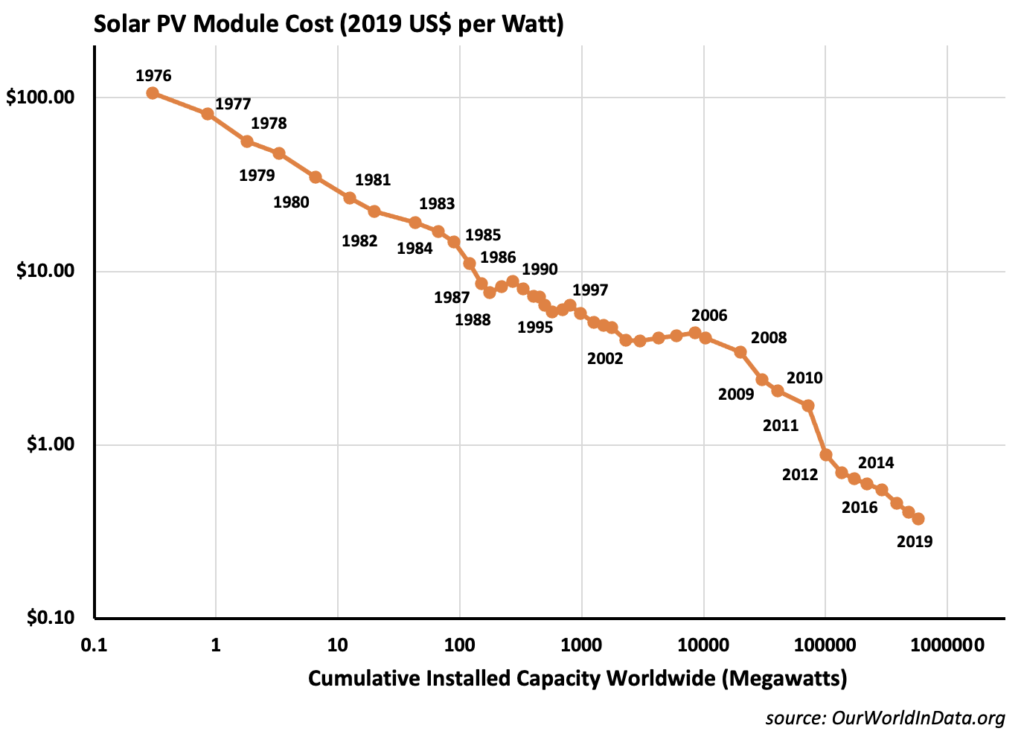 But as the cumulative capacity of solar panels ever produced has increased, the price of producing the next unit has decreased, driving even greater adoption of solar panels. Plotted on the graph above, where each axis is spaced in multiples of ten, is the ‘learning curve’ (or ‘experience curve’) and which, when shown this way, remained remarkably linear for most of Mr. Macron’s lifetime.

By 2019, the price per watt of solar panels was less than 1% the price per watt it had been in 1979. A more than 100X decline in the span of forty years. Similar trends have been seen for the price of wind turbines and for lithium-ion batteries, and none of these trends seem to be showing any signs of slowing down.

This is a key mechanism in the ‘pattern of disruption’ behind why disruptions in energy, transport, and other technological fields happen ‘faster than expected’ and why it can be difficult to forecast the point when the most-dramatic part of their S-shaped adoption curves might take off.

Nuclear as an incumbent

The cost of nuclear power is also driven by feedback loops, but that study by the International Institute for Applied Systems Analysis (IIASA), using data made public in the year 2000, found that France’s nuclear program perversely exhibited “negative learning” – that is, the more nuclear capacity that was built throughout the 1970s, 80s, and 90s, the more expensive building additional reactors became.

The IIASA study attributes this trend to other feedback loops – regulatory ones. As each new nuclear project was undertaken, regulators required more safety features, more locally-made equipment and components, and new generations of reactors that effectively reset the learning curve to a new, higher starting point.

And this was true not just for France. The study found that “all countries with significant programs invariably exhibit negative learning” in nuclear power costs.

But the interaction of the rapidly improving costs of solar, wind, and battery (SWB) energy, with the ‘negative learning’ dynamics of nuclear power could be explosive. As we said in Rethinking Climate Change:

“Disruptions are driven by the convergence of new technologies that trigger causal feedback loops within and across markets and sectors. History shows that these loops interact with and amplify one another, accelerating the adoption of new technology in a virtuous cycle while accelerating the abandonment of old technology in a vicious cycle. The net result of these systems dynamics is that disruption tends to unfold with surprising speed. We see this same basic pattern repeat with technologies and industries of all kinds.” 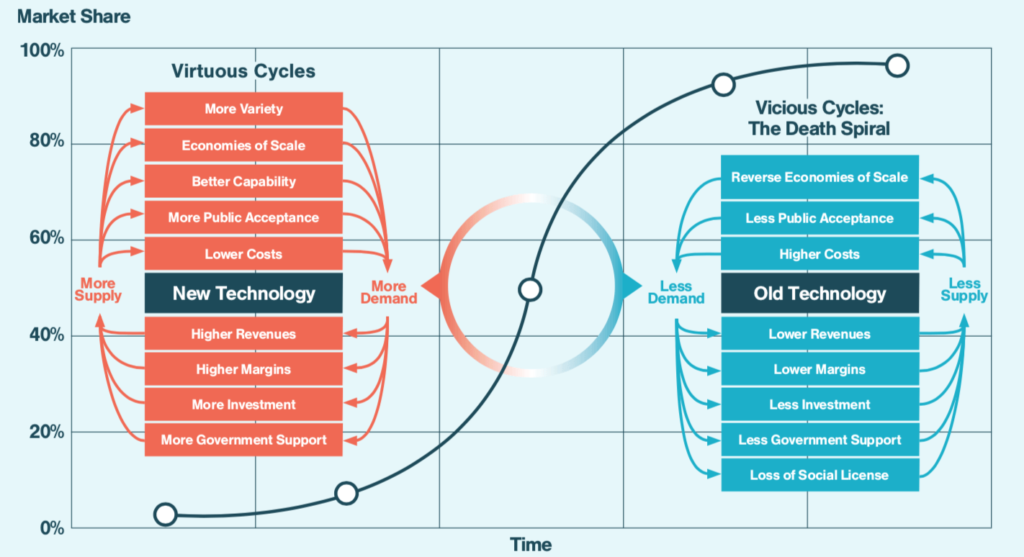 The example of the rise of nuclear power in France shows that entire nations can dramatically transform their energy systems over just a decade or so. But this is far from the only example.

With the discovery of natural gas in the North Sea in the 1960s, the Dutch coal mining industry collapsed. Production peaked at over 12 million tons in 1961 and was zero by 1975.

Dutch home heating, which relied on coal or oil stoves until the early 1960s, had almost completely eliminated them by 1980.

And Japan phased out nuclear power quickly after the Fukushima disaster in 2011. In 2010, nuclear power accounted for more than 25% of Japanese electricity. Just two years later, it was less than 2%.

This last lesson – that nuclear power can be eliminated even more quickly than it was built – might be the most-relevant one for Mr. Macron. Due to dramatically changing economics driven by self-reinforcing feedback loops, we are now in the midst of a new energy disruption. Except this time, nuclear power is the incumbent.

This is Part 2 in our series ‘The Pattern of Disruption’. Part 1 is available here. Part 3 is ‘How Synthetic Industries Replaced Natural Sources and Transformed the World‘.

4 thoughts on “France is Forgetting the Most Powerful Force in the Universe (The Pattern of Disruption, Part 2)”