Russell Marker was a man who was good at finding answers and, in late 1941, he found in the book of a botanist friend an answer he had been seeking for a long time. Dioscorea mexicana, or the Mexican yam, is found throughout Mexico and down to Panama and can grow to several hundred pounds in size. Marker needed to get his hands on as much of it as he could. Unfortunately, this was just after the US had been attacked at Pearl Harbor and American authorities advised strongly against unnecessary travel outside the country. Thirty-nine-year-old Marker, unable to speak Spanish and with only some borrowed cash in his pocket, packed a bag and boarded a bus alone bound for Veracruz, Mexico, anyway.

Thirteen years prior, in 1928, scientists at the University of Rochester (New York) discovered that after ovulation, when the egg departs for the womb, it leaves behind a tiny sac that produces progesterone, a chemical that inhibits the release of additional eggs. In 1937, scientists at the University of Pennsylvania found they could prevent ovulation (and thus, pregnancy) in rabbits by injecting them with this chemical. But according to Bernard Asbell in The Pill: A Biography of the Drug that Changed the World, progesterone “was so expensive that even research scientists couldn’t afford it. The minute amounts extracted from animals was bought up to improve fertility in world-class racehorses.”

But Marker was a gifted chemist. At about the time of the discoveries in Rochester, he developed the concept of the ‘octane rating’, which is still used today for grading motor fuels. By the time of the ovulation experiments in Pennsylvania, he was a professor at Pennsylvania State when he had the idea to try to synthesize progesterone chemically, rather than extract it from animals.

A family of chemicals called sapogenins were known to be in the roots of many plants, and they are chemically like progesterone. Marker’s idea was to harvest those chemicals from plant roots and then convert the chemicals to progesterone. But which plant? Many promising plants have roots so small that it would take a great deal of effort to harvest enough of them. Marker needed a plant whose roots were enormous, and when he found that plant, the Mexican yam, in the book of a friend, he set off for Mexico to find it in the flesh.

In Mexico, he made three kilograms of progesterone (“worth about $240,000” according to Asbell, or about $80 per gram) and in 1944 established the Syntex company with two colleagues and financial backing from Milton Reynolds, the man who made his fortune by introducing the first commercially successful ballpoint pen to the US. As Marker and his colleagues made more of the chemical, it got cheaper to make even more.

This is part of a ‘pattern of disruption’ we have noticed many times: The more of a new high-tech product that is produced, the cheaper it gets. And as it gets cheaper, new uses are found for it.

Abundant progesterone also meant an abundance of other, chemically similar hormones like cortisone, which is used a treatment for rheumatoid arthritis and for keloids, as cortisone can be made from progesterone.

In 1949, twenty-six-year-old chemist Carl Djerassi joined Syntex and quickly found other ways to synthesize cortisone, as well as ways to synthesize other hormones like estrone and estradiol. Asbell writes that, by the early 1950s, “Syntex became the major supplier of synthetic hormones to drug houses in Europe and America.”

Not Just Cheaper, But Better

In 1950, Djerassi set himself the goal to find a progesterone-like chemical that was better than natural progesterone, which must be given by injection. He wanted one that could be taken orally. Djerassi knew of a form of testosterone, a masculine hormone, that had been produced to be taken orally described in a research paper published just a few years before. In 1951, he used a process like the one described in the paper, but with Marker’s progesterone instead of testosterone, to yield norethisterone. According to Asbell, “Djerassi’s new substance, when taken by mouth, was eight times more powerful than natural progesterone.” (And thus, Djerassi’s discovery was effectively eight times cheaper than the synthesizing progesterone.)

Syntex ultimately produced two formulations, one that was approved in 1963 and one in 1964, thirteen years after Djerassi first synthesized norethisterone. Over the next few years, other major manufacturers made similar formulations available, and women suddenly had an abundance of oral contraception options to choose from. The concept of an oral contraceptive was so profound that it is commonly referred to simply as “the Pill”. Asbell writes “the Pill has been swallowed as a daily routine by more humans than perhaps any other prescribed medication in the world.” Their makers did not initially realize it, but cheap and effective birth control was not only about to launch a medical revolution, but sexual and social ones as well.

Between penicillin, the rise of hospital births, and the Pill, by the early 1960s for the first time in history, women had control of some of the most-important aspects of their reproductive health, staying alive, and only getting pregnant when desired. (Contraceptives were not available to married women in all states in the US until the Supreme Court ruling of Griswold v. Connecticut in 1965 and were not available to unmarried women in all states until Eisenstadt v. Baird in 1972.)

The Pill likely played a key role in the (unsuccessful) push for an Equal Rights Amendment and the (temporarily successful) Roe v. Wade Supreme Court case for the legalization of abortion. And it dramatically changed the number of children people say they wanted. Over just about a decade after it introduction, the largest portion of people in the US went from reporting that they wanted ‘4 or more’ children to reporting that they wanted ‘0 to 2’. 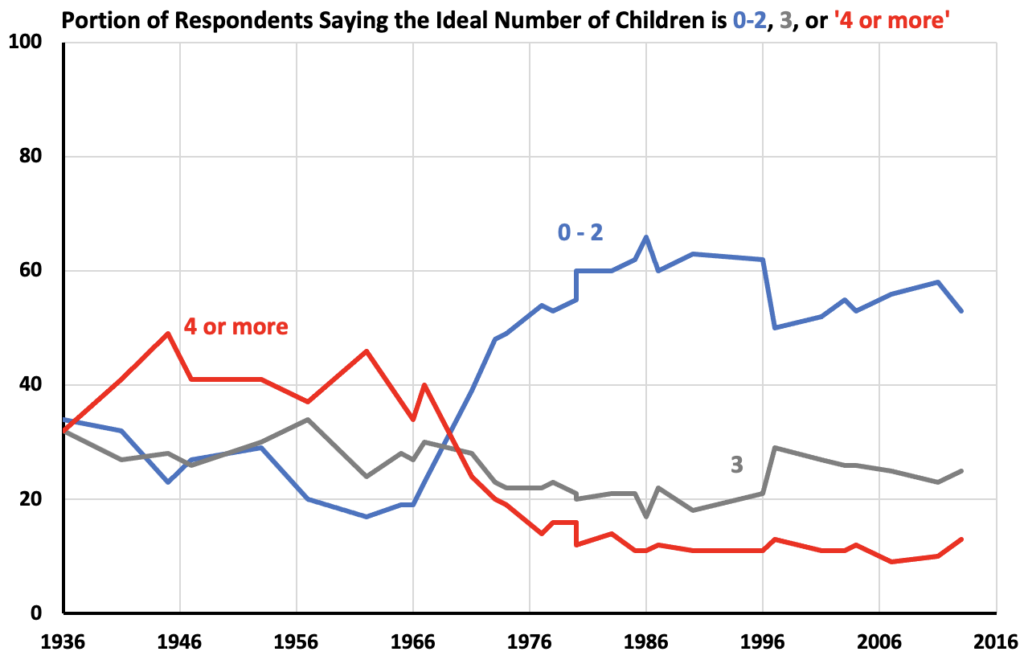 Portion of Respondents Saying the Ideal Number of Children is 0-2, 3, or ‘4 or more’. Data from Gallup

According to Claudia Goldin, professor of economics at Harvard University, the Pill profoundly affected the ability of women to get a higher education, especially in professional fields like law, business, and medicine. Goldin’s research shows that the percentage of medicine, law, dentistry, and MBA students in the US who are women went from under 10% in the late 1960s, just before the Eisenstadt v. Baird ruling, to over 40% about fifteen years later.

And it was not just at the graduate level. The number of Bachelor’s degrees issued to women in the US has exceeded the number issued to men every year since 1982. 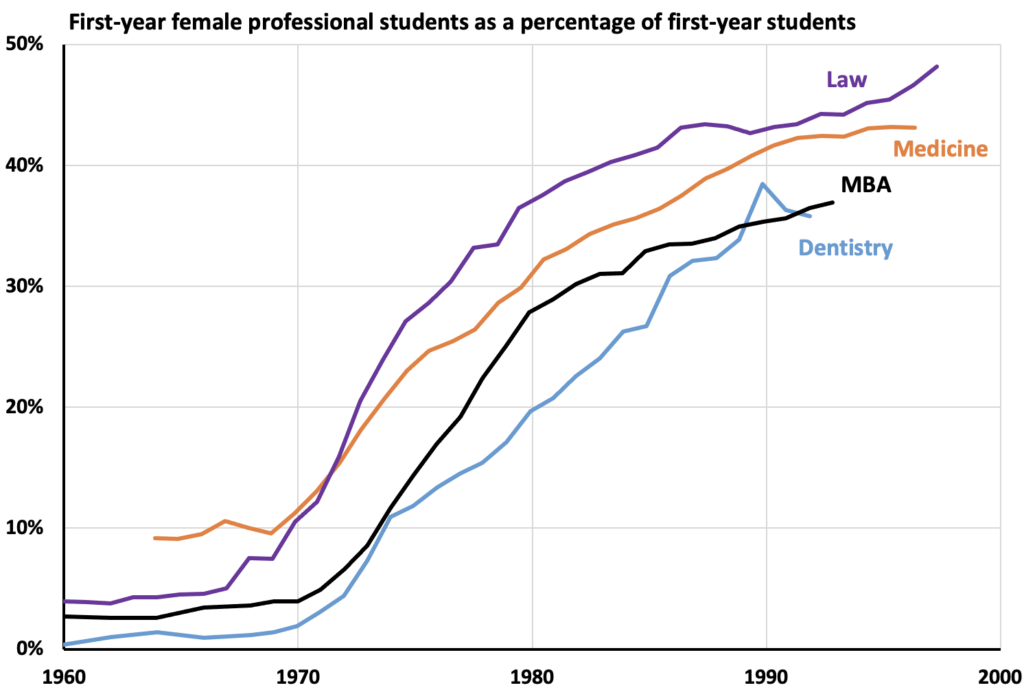 First-year female professional students as a percentage of first-year students. Data from Goldin, ‘The Power of the Pill: Oral Contraceptives and Women’s Career and Marriage Decisions’. Journal of Political Economy, 2002

In essence, the money Milton Reynolds made from his ballpoint pen gave rise to the contraceptive pill and, by doing so, dramatically increased the number of people wanting pens.

This is Part 9 in our series ‘The Pattern of Disruption’. Part 1 is available here.