For most of human history, it was not routine for people to brush their teeth. But by the 1960s, majorities of most Western countries had a daily oral hygiene routine. Because oral hygiene is so central to wider health, the mainstreaming of dental care had a huge impact on the global disease burden, reducing the risks and prevalence of diabetes, respiratory infections, death from pneumonia and heart disease. The humble toothbrush played a key role in improving global health and quality of life.

But the mainstreaming of toothbrushing took place quite quickly, over just a few decades before and shortly after the Second World War. In February 1928, gifted chemist Wallace Carothers began working for chemicals giant DuPont after being recruited away from teaching at Harvard University. Carothers’ team produced a lot of cool stuff. In two years, they produced the world’s first synthetic rubber, neoprene, and during his career he also developed the first synthetic musk, Astrotone.

But the invention that Carothers is best known for came in 1935 with the discovery of nylon, the world’s first synthetic fiber.

The invention of nylon couldn’t have come at a better time. US tensions with Japan were heating up throughout the 1930s and the US was heavily dependent on Japan for silk. By the late 1930s, the US was importing four-fifths of the world’s silk, with Japan accounting for 90 percent of US supply. And about 75 to 80 percent of America’s silk was used to make women’s stockings.

So silk was a big industry, and it was making a number of key powers in Asia rich.  East Asian silk production had undergone multiple disruptions in its underlying technologies, and was according to Debin Ma of Hitotsubashi University in Tokyo, the leading export for Japan and China from 1850 to 1930.

In the late 1800s, the hand-reeling of silk was displaced by machine-reeling technology and then, in the early 1900s, scientifically bred silkworm varieties quickly replaced more-traditional varieties.

The mechanization of Japanese silk reeling is even more remarkable given that the country was largely closed to the outside world prior to 1868. According to Virginia Postrel, author of Fabric of Civilization: How Textiles Made the World, “in 1872, the government sponsored the first reeling factory, importing French machinery… By the mid-1890s, hand reeling accounted for less than half of the country’s raw silk production.”

This is all part of the ‘pattern of disruption’ we have seen many times: a new technology that is dramatically superior to an existing one can take over the market in just ten or fifteen years.

The rise of machine-reeling put pressure on silkworm breeders to both increase silk filament production and to make silk quality more uniform. Using Western inventions like the thermometer and hygrometer (humidity measurer) and the scientific method, in the 1910s “Japanese scientists combined the country’s long tradition of silkworm breeding with Mendelian genetics to develop a highly productive silkworm hybrid. Its cocoons were so superior, especially for machine reeling, that the new silkworm type swept the country.” 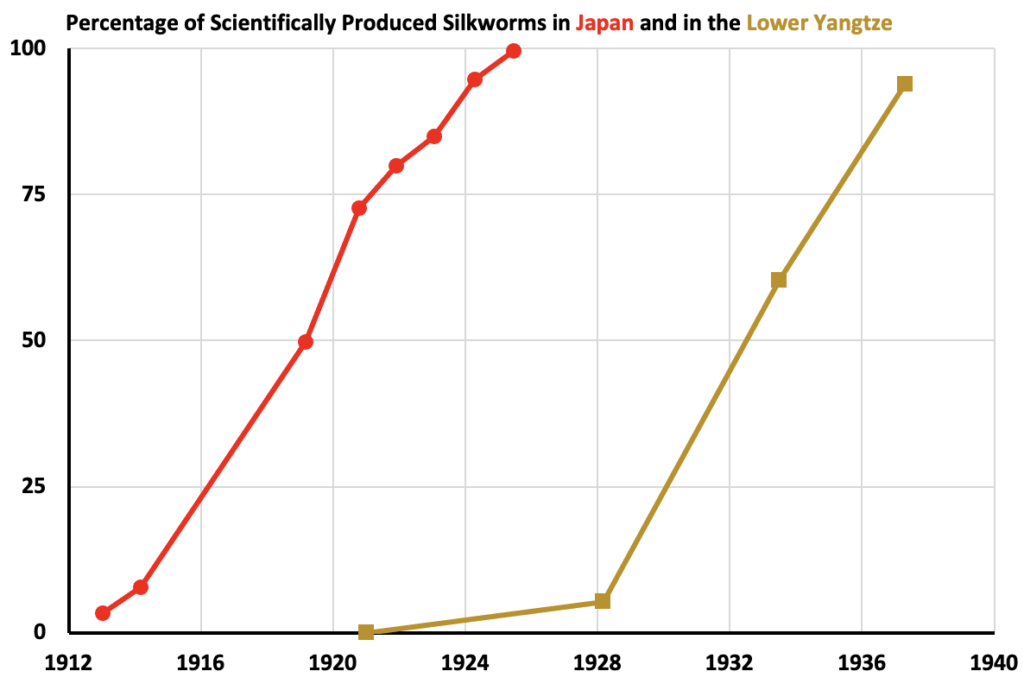 Percentage of Silkworms in Japan and in the Lower Yangtze silk industry that are scientifically produced varieties.

According to Ma, scientifically produced hybrid silkworm varieties, which accounted for less than 10% of Japanese silk production in 1914, were more than 80% just eight years later and over 90% of production by 1924. The Lower Yangtze region of China saw a similarly dramatic change in silkworm varieties, albeit about thirteen years after Japan’s transformation, going from less than 10% hybrid in 1928 to more than 90% in 1937.

This was not a one-for-substitution, but drove an expansion of the market. From 1920 to 1930, Asian silk production was more than six times the size it was prior to the machine-reeling and scientific silkworm revolutions.

Japan’s lead in both the mechanization of silk reeling and in the adoption of hybrid worm varieties gave it the edge to outcompete China. In 1873, China was exporting three times as much raw silk as Japan. By 1930, the situation had completely reversed, with Japanese exports tripling those of China.

The is another part of the ‘pattern of disruption’ we have seen: new technologies are often adopted by outsiders, and the winners from one era of technology can become the losers in the next. Japan adopted machine-reeling of silk fiber before China, and led the development of scientifically bred varieties of silkworms, and so dominated the silk market by the early 1930s.

But this new era would not last long. DuPont first brought Carother’s nylon fiber to market in 1938. DuPont’s nylon stockings first went on sale in May 1940. Though slightly more expensive than silk, nylon stockings were a huge hit because they were a much better product at a price point that was still affordable. In RethinkX founder Tony Seba’s categorization, nylons count as a ‘disruption from above’, being both initially more expensive and also better performing than the incumbent product. DuPont’s press release said nylon was “as strong as steel, as fine as the spider’s web, yet more elastic than any of the common natural fibers and possessing a beautiful luster”.

Author Susannah Handley wrote in Nylon: The Story of a Fashion Revolution that “nylon became a household word in less than a year and in all the history of textiles, no other product has enjoyed the immediate, overwhelming public acceptance of DuPont nylon.” In just two years, DuPont earned 30% of the women’s hosiery market.

But the attack on Pearl Harbor brought Asian exports of silk to a sudden halt. Soon after the introduction of nylon stockings, the sales of all women’s stockings collapsed as both the supply of Japanese silk abruptly ended and as DuPont diverted all nylon production to the manufacture of parachutes, rope, aircraft fuel tanks, flak jackets, hammocks, mosquito netting, and other products.

Nylon became known as “the fiber that won the war.” For four years American women had to ‘make do’ the best they could with substitutes like leg make-up, a cosmetic painted onto the legs to make it look like the user was wearing stockings.

When the war ended, there was such a rush to buy nylon stockings again that fights broke out over the limited supply, the so-called ‘Nylon Riots’. The sales of silk stockings never recovered.

Over the course of about five years, most of the world’s demand for silk simply evaporated. Nylons went from 0% to essentially 100% of the US women’s hosiery market. Europe, too, went crazy for nylon. “In 1950, West German retailers sold just 900,000 pairs of ladies’ nylon stockings”, according to Tony Judt in Postwar: A History of Europe Since 1945. “Four years later, in 1953, they moved 58 million pairs.”

But conquering 100% of the hosiery market was, also, just the start of the synthetic fiber industry.

The first product to ever use nylon was not, in fact, women’s stockings, but toothbrush bristles. The toothbrush itself was probably invented in China during the Tang Dynasty, about 1300 years ago. Before that, people around the world used a variety of ways to clean their teeth, including sticks whose ends were shredded so that they could be used to work debris loose, and mouthwashes made with vinegar, salt, olive oil, alcohol, and a variety of other ingredients. For hundreds of years, brush handles were made from bone or ivory, with bristles made from the coarse hairs from a boar’s neck.

But the ‘pattern of disruption’ reveals that what stays the same for millennia can be rapidly overturned in a decade or two.

In February 1938, the Weco Products Company of Chicago began selling its new “Dr. West’s Miracle-Tuft”, the first toothbrush to use synthetic DuPont nylon bristles. “Until now, all good toothbrushes were made with animal bristles,” noted a 1938 Weco advertisement in Life magazine.

Johnson & Johnson introduced their own nylon-bristle toothbrush the following year. Today, virtually all toothbrushes have nylon bristles, even ones whose handles are made from bamboo or other natural materials.

Artificial polymers in general, and nylon in particular, sparked a revolution in personal oral hygiene that played out over the ensuing decade around World War II, when US soldiers were ordered to brush their teeth to address the legion of health problems they were experiencing. The newly developed nylon bristles made the mass production and dissemination of toothbrushes not just possible, but cheap. Then, during the war, Dr. Charles Bass, who served as dean of the Tulane University School of Medicine, invented waxed nylon dental floss. This replaced silk floss just as quickly as nylon hosiery had replaced silk stockings.

Although Celluloid and Bakelite plastics had replaced bone and ivory handles in the early 1900s, in 1951 DuPont invented Lucite acrylic resin, allowing different colored clear plastic toothbrush handles to appear. Starting in the early 1940s, with regular toothbrushing on the rise, Proctor & Gamble began a program to develop a fluoride-containing toothpaste, which was launched in 1955 as the Crest brand, which remains the best-selling toothpaste brand in the US, effectively splitting the market with Colgate.

Prior to World War II, people used Celluloid or Bakelite-handled toothbrushes with boar’s hair bristles, toothpaste or tooth powders that were non-fluoridated and might contain chalk or charcoal or other abrasive ingredients. But over a roughly fifteen-year period, the invention of nylon drove a personal oral hygiene revolution based on acrylic-handle, nylon-bristle toothbrushes, waxed nylon dental floss, and fluoride-containing toothpaste.

This is another part of the ‘pattern of disruption’ we have seen: a technology developed for one purpose – in this case, nylon as a replacement for silk – often kicks off unintended revolutions in unrelated fields, like oral hygiene.

“There’s a whole series of synthetic materials that indeed came from the base idea that chemists can design and develop a series of materials that had certain properties, and the ability to do it from the most basic molecules,” said Matt Hermes, associate professor in the bioengineering department at Clemson University.

According to Virginia Postrel, “if the endeavor succeeds, silk won’t need to come from insects. It will be brewed in giant fermentation vats like beer. And the process has implications beyond silk. Wool, too, is a protein polymer. So is cashmere. So are countless other fibers we can barely imagine.”

The next great revolution in materials is well on its way. Maybe, just maybe, it will bring silk stockings back in fashion. But perhaps more interestingly, the disruption in materials heralds the possibility of manufacturing clothes cheaply, quickly, and without environmental impacts.

Or maybe it will start a revolution in another unrelated field. Boston-based company Mori found that coating foods in a thin layer of edible, flavorless silk helps to slow down rotting, potentially eliminating plastic packaging and helping reduce food spoilage.

The potential implications of companies like these for the future of what we wear, what we eat, and the impact on current dominant agricultural industries, is likely to be swift and profound – just as we’ve already seen many times before.

(Graph data from Debin Ma (2004). ‘Why Japan, Not China, Was the First to Develop in East Asia: Lessons from Sericulture, 1850–1937’. Economic Development and Cultural Change.)

This is Part 7 in our series ‘The Pattern of Disruption’. Part 1 is available here. Part 8, “Rocket to the Cristal” is here.