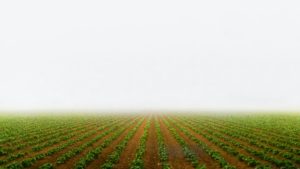 Last year, the folks at Our World in Data published an article and some graphics about how human diets affect land use.

The conclusion, as you can see on their chart below, is that if everyone in the world ate a vegan diet – one without any animal products at all – global agricultural land use would decrease by 75%. 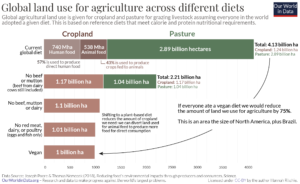 Examining land use makes it clear how inefficient consuming animals really is; the carnivore’s footprint is huge compared to the vegan’s. Our World in Data suggests that globally about 1/3rd of forests and 2/3rds of grasslands and shrublands have been converted to cropland and grazing land over the past 10,000 years. This is because animals like cattle and sheep take up an enormous amount of space to graze, and also require supplemental feed. Today, the total area it takes to feed animals is about 3.3 billion hectares. To put that into perspective, the total amount of habitable land on earth is only about 10 billion hectares.

– Our World in Data 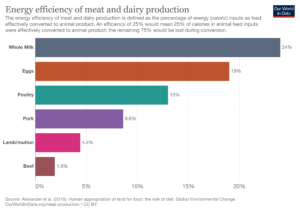 If we just ate the plants we feed to animals, not only would we have more free land and waste less energy growing animals, but we would also miss out on all the other impacts that the mere existence of billions of livestock animals has on the planet (i.e., greenhouse gas emissions, air, land and water pollution, animal welfare etc.). See Rethinking Food and Agriculture and Rethinking Climate Change.

All that extra space would provide ample opportunity for reforestation around the world, would relieve the pressures that lead to deforestation, and would increase natural biodiversity (including large, wild herbivores to keep up grazing). All of which would massively help fight global climate change by creating and maintaining a global carbon sink to pull CO2 from the atmosphere– half the battle of climate change.

In terms of the overall impact on climate change, Pat Brown of Impossible Foods did a study recently that found that a 15-year phaseout of animal agriculture with the associated biomass recovery (reforestation) “would, through the end of the century, have the same cumulative effect on the warming potential of the atmosphere as a 25 gigaton per year reduction in anthropogenic CO2 emissions, providing half of the net emission reductions necessary to limit warming to 2oC.”

While all this sounds good, the idea of dropping animal products from one’s personal diet, much less the global diet, can be scary and frankly, daunting. The animal agriculture industry is enormous; meat and other animal products seem to be everywhere, in every restaurant, grocery store and home on the planet. In 2021, the USDA reported that there were just over 1 billion head of cattle and nearly 26 billion chickens in the world – far outnumbering humans.

Asking people to give up eating animals for the sake of the animals or the environment is a noble venture but has also been largely ineffective over the past 50 years. While the number of people who do so has been increasing rapidly over the past 5 years in many countries, the total number of vegans is still low – likely still less than 1% of the world’s population. Banning animal agriculture outright and forcing people to “go vegan” by giving up the foods they love and value is not only draconian, but is also never going to happen.

Fortunately, there is a way forward where we do not have to eliminate animal products from the global diet: we just have to get them from another source. 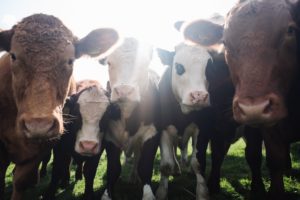 Animal Products Without the Animal

Rapid advances in precision biology (modern information technologies plus modern biotechnologies) have allowed us to make huge strides in precision fermentation (PF), a process that allows us to program micro-organisms to produce almost any complex organic molecule (especially proteins), and cellular agriculture (CA), a process that involves growing animal tissue cells outside the animal.

These outputs are then combined with other ingredients and built up into the foods we love and recognize. The products can be genetically and functionally identical to the animal products we currently have, or through customization, they can be made superior in every key attribute – more nutritious, healthier, better tasting, and more convenient, with almost unimaginable variety.

In Rethinking Food and Agriculture, we found that PF will make protein production 5 times cheaper by 2030 and 10 times cheaper by 2035 than existing animal proteins, before ultimately approaching the cost of sugar. They will be up to 100 times more land efficient, 10-25 times more feedstock efficient, 20 times more time efficient, and 10 times more water efficient than animal products and they will also produce an order of magnitude less waste. This means that, by 2030, modern food products will be higher quality and cost less than half as much to produce as the animal-derived products they replace.

These advances will be combined with an entirely new model of production we call Food-as-Software, where the food system is based on individual molecules that food engineers anywhere in the world can use to design products in the same way that software developers design apps. This model ensures constant iteration so that products improve rapidly, with each version superior and cheaper than the last. It also ensures a production system that is completely decentralized and much more stable and resilient than industrial animal agriculture, with fermentation farms located in or close to towns and cities.

These clean new technologies will therefore rapidly outcompete and disrupt the older, dirtier animal-based industries through market forces alone. This means we are not dependent upon draconian restrictions on either the supply or the demand side of the economy, which in turn means we do not need to guilt or force people into changing their diets and can avoid the social harms of austerity policies that reduce standards of living and impede human development (the burden of which falls disproportionately on those communities and nations that are already disadvantaged).

This is not science fiction. We already eat many foods with ingredients produced by PF, yet very few of us are aware of it. These include citric acid, valencene (orange taste and smell), raspberry aroma, sweeteners like thaumatin, and vitamins, as well as a number of enzymes used in food processing like rennet, amylase, or lipase.

Since the publication of Rethinking Food and Agriculture in the fall of 2019, the idea of replacing animal products with PFCA versions has become a reality. Actual commercial products have hit the market that are genetically identical to the ones formerly extracted from animals.

Australian singer Sia spoke about some of these possibilities in a powerful piece she wrote for Fortune. Her focus was on meat, and rightfully so – it is the largest component of animal agriculture. But there is so much more going on in the food, materials, and cosmetics space right now, and every product makes a difference. Some of the products available (or available soon) on the market today include:

These are some of the companies and their products that have come to market, but others are close behind. Consider anything that currently comes from an animal (or plant): somewhere around the world there is probably a company working on producing that product, exactly the same, without the animal.

The variety of products being developed right now is striking, and as more and more types of products are produced, demand for conventional animal products will at first be chipped away by modern alternatives. In the cattle farming industry, for instance, the products milk, hides (for leather), collagen, gelatin, and ground and tissue meat will all be replaced by lower cost, higher quality modern substitutes.

As the various product markets in all animal industries begin to be disrupted, prices of the remaining products will jump as the full costs of production and processing will need to be borne by an ever-smaller number of products that still have markets available to them.

This price spiral and continuing reduction in demand will ultimately lead to the value chain breaking down as slaughterhouses, renderers, processors, and packagers see decreasing utilization and hence reversing economies of scale. Most animal agriculture industries operate on extremely thin margins, with high operating and financial leverage, and are propped up by government subsidies. Many are already hanging in the balance and just a small drop in demand will send them spiraling towards bankruptcy.

This ultimately means that the number of livestock animals in the world will drop dramatically as the disruption proceeds. We estimated that the US cattle herd would be down 50% by 2030 and 75% by 2035, with the rest of the world and all other livestock following close behind. This means that while the world is still eating all their favourite animal products made via PFCA, the impact from animal agriculture will be decreasing.

In other words animal foods will be decoupled from their impacts, and everyone can happily eat like a carnivore with a vegan-sized footprint.

This blog contains a summary of both Rethinking Climate Change (2021) by James Arbib, Adam Dorr and Tony Seba, and Rethinking Food and Agriculture (2019) by Catherine Tubb and Tony Seba.