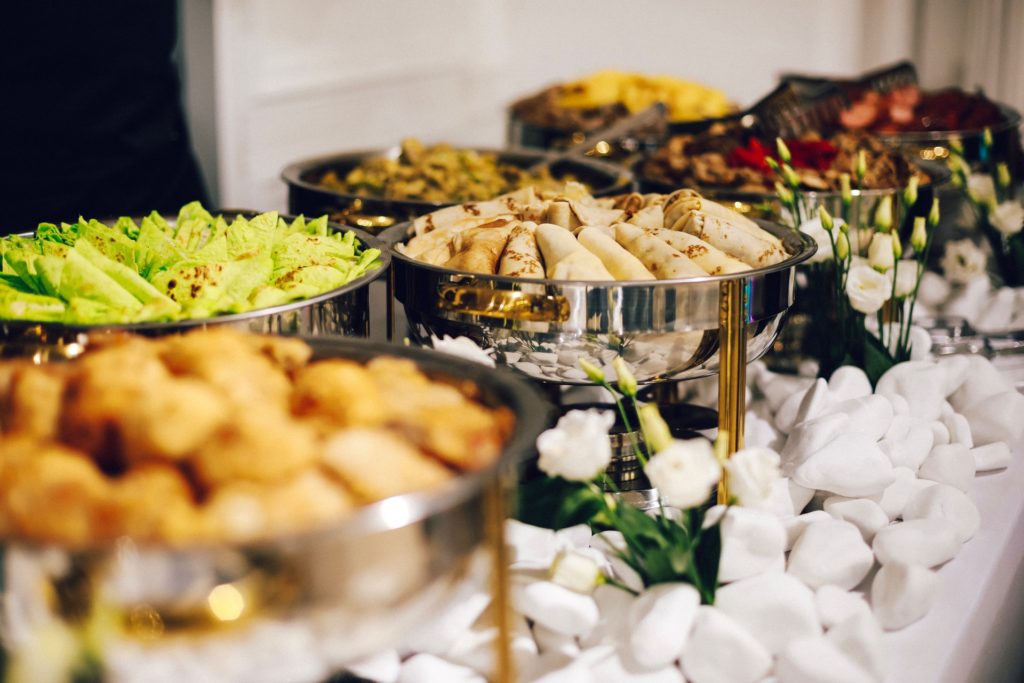 A global food crisis is looming, with high natural gas prices driving up the cost of ammonia fertilizer and the war in Ukraine threatening this year’s crops from both there and Russia. The consequences of mishandling this crisis could be dire.

Research by complexity theorist Yaneer Bar-Yam suggests that high food prices are directly connected to riots. High food prices precipitated the 2011 ‘Arab Spring’, the 2007 Mexican ‘tortilla riots’, and numerous other incidents of unrest. Now we might be on the cusp of a new wave of chaos if we are not able to manage the global supply.

To a large extent, people owe their lives to a single invention: the ability to manufacture large supplies of cheap ammonia fertilizer using little more than natural gas and air. Nitrogen is essential for our bodies to make the proteins we need to live. Nitrogen molecules constitute about 80% of the air we breathe, but because they are locked up in the form of pairs of atoms, most living things cannot access the nitrogen we need directly, ourselves included.

For much of history, fertilizer was obtained from animal waste and, more recently, by mining natural deposits of nitrates, such as those found in the Atacama Desert of what is now northern Chile. But over just a few years in the early part of the 1900s, how we obtain nitrogen underwent a dramatic transformation, the consequences of which are still playing out today. 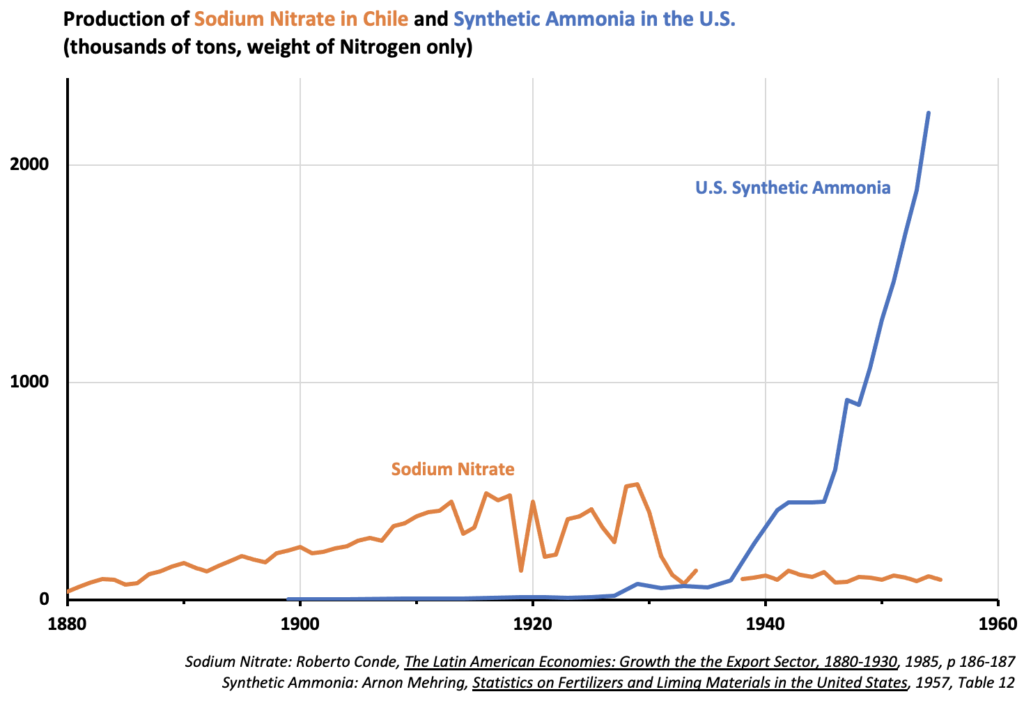 Chile’s victory in 1880 in a war with Bolivia and Peru consolidated ownership of the Atacama Desert into the hands of a single nation. The Atacama is one of the driest places on Earth. Geologists suggest that nitrogen-laden groundwater that has slowly percolated through the desert soil and evaporated is responsible for a layer of soil there that is infused with sodium nitrate. This is a salt which is useful as both a fertilizer and to produce gunpowder and explosives.

The pattern of disruption reveals that disruptions take place when technologies converge across different sectors. This case was no exception: The ability to economically exploit these resources in this hostile environment in the latter part of the 1800s and early part of the 1900s was due to a convergence of factors.

Dynamite, which was invented in the late 1860s and became widely available throughout the 1870s, made accessing the soils easier. “Holes are drilled through the overlying material,” R.H. Whitbeck wrote in 1931, “and charges of powder or dynamite are shot off at the bottom. The explosion shatters the mass for some distance around.”

And steam power, which was made radically more efficient by James Watt, made shipping cheaper, especially in the later part of the 1800s. Then steam-powered machinery made mining the nitrate-bearing soil layer easier. Then steam-powered railroads made it easier to transport from the high plateau to the shore.

By the 1890s, Whitbeck reports, “Chilean nitrate supplied about four-fifths of the inorganic nitrogen used in the world.” The government of Chile quickly became dangerously dependent on this single industry. Nitrate mining accounted for less than 10% of government revenue in 1880, but by 1890, just ten years later, it was over 50%. Just a few years later, it approached 70% and remained above 50% until the dawn of the First World War.

This played a major role in the rapid expansion of global industrial food production. But the era of mining sodium nitrate deposits would not last long. Exports peaked in 1929 and then collapsed 85% over the next four years, never again to regain even the lowest level seen in the 1920s.

The nitrogen disruption was, in short disrupted – by the invention of a new way to obtain nitrogen, one that was cheaper than mining it and which could be done in almost unlimited quantities anywhere on Earth.

In 1909, chemist Fritz Haber demonstrated that nitrogen-containing ammonia could be produced by combining air and methane (natural gas), which Thomas Hager, the author of The Alchemy of Air, called “the most important discovery ever made”. The BASF company, founded in the 1860s to produce artificial dyes, bought the rights to Haber’s process, and BASF chemist Carl Bosch began to develop its industrial-scale production.

“By 1918,” Simon Hanson wrote in his 1951 book Economic Development in Latin America, “Germany was self-sufficient, others of the industrialized countries were moving toward self-sufficiency, Germany was even ready to go into export markets once the war was over…. From 1920 to 1933 a veritable revolution took place in the nitrogen industry. The leading industrial countries rushed mass production of synthetic ammonia from the air; world capacity to produce nitrogen rose more than threefold from 1.6 million to nearly 5 million tons. While it is true that world consumption was also rising, more than doubling in the period, Chilean production dropped from 430,000 tons per year to 76,000 tons.”

As we have seen many times in our ‘pattern of disruption’, incumbent Chilean nitrate producers initially downplayed the threat that synthetic ammonia posed to their business.

“For a time the nitrate producers and government officials had taken the ground that there really was no danger from synthetic nitrogen,” R.H. Whitbeck wrote in 1931. “After all, the world must have nitrate, and Chile was the only place to get the real ‘natural’ article. However, things have looked increasingly different since the [First] World War. Germany, the largest pre-war buyer, is making all the nitrogen it needs and is exporting a surplus.”

It was not just Germany’s turn from the largest customer to a major competitor that threatened Chilean nitrate exports. The mechanization of farming due to machinery run by the internal combustion engine did too.

Paul Marr of Shippensburg University wrote in a 2007 article called ‘Ghosts of the Atacama’, “American agriculture had become mechanized and it was impractical to use natural nitrate fertilizers with mechanized agriculture at the turn of the twentieth century”.

Economically, nitrogen mined from South America and then shipped around the world could not compete with nitrogen taken directly from the air. In 1926, for example, sodium nitrate sold for $3.27 for twenty pounds, but only a portion of this weight is the desired nitrogen. Synthetic ammonia sold for $1.75 for twenty pounds, less than half the price per pound for a product that contains five times as much nitrogen. That is, on a dollar-for-dollar basis, buyers got about ten times as much nitrogen from synthetic ammonia as from sodium nitrate.

The growth of the synthetic ammonia industry was staggering. The graph above only shows U.S. production, but world production according to the United States Geological Survey, a government agency tasked with compiling such statistics, was three to five times the level of U.S. production. By the time of World War II, global production of nitrogen was higher than it had ever been from mining, and it would only continue to grow dramatically.

The effect of synthetic ammonia production on the global human population has been profound. It is fair to say that the majority of people alive today owe their existence to cheap, synthetic fertilizers. The world population is now approaching 8 billion people. 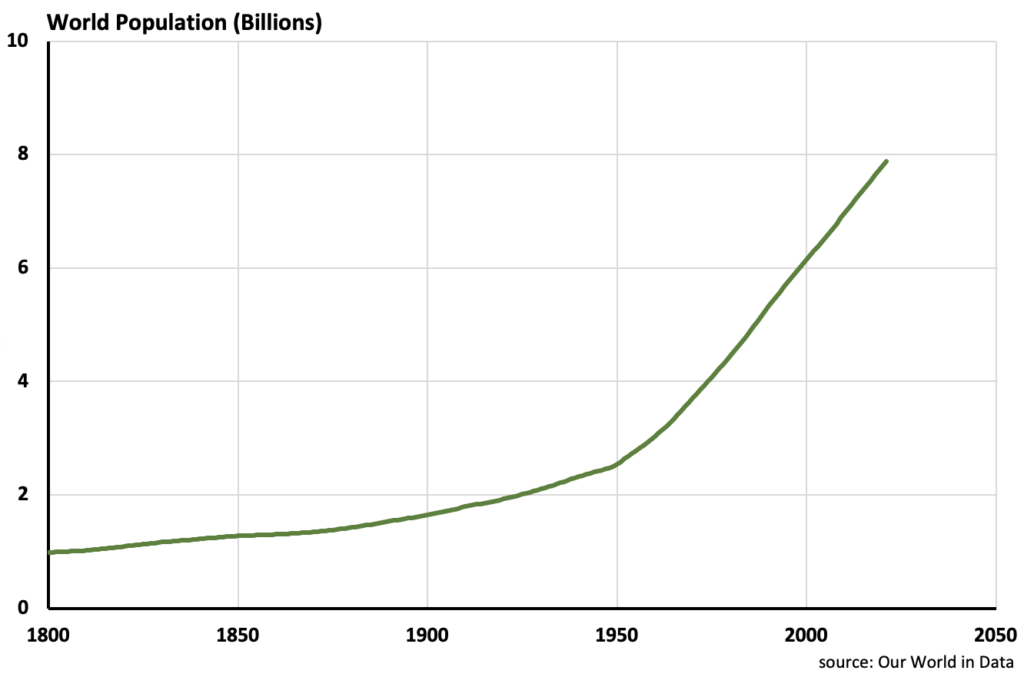 And it is not just the human population that has grown dramatically, so have our farm animals. Scientists now estimate that 97% of the mammals on Earth (by weight) are humans and our mammal livestock. And that’s not even counting chickens and other farmed poultry, who are now about 70% of the birds on Earth.

All this has come with costs, both political and environmental. It is precisely our success in farming that has made places like Ukraine tempting to outsiders: it is first in Europe in both arable land area and ammonia production, and one of the world’s largest producers and exporters of barley, corn (maize), potatoes, rye, wheat, chicken, and cheese.

The management of nitrogen-bearing wastes has become a major environmental issue in its own right. Runoff from excess fertilizers have created ocean ‘dead zones’ which do not create enough food to support at-risk species, or which get taken over by ‘sea snot’.

But now we are on the cusp of new revolutions in food production. Precision fermentation (PF) is allowing us to make cows’ milk without cows and egg whites without chickens. Chicken meat grown without killing chickens is already on sale. Some of our previous work has shown that precision fermentation and cellular agriculture could produce meat, dairy, and other products with far less input of grains, and therefore far less fertilizer use.

A century ago we solved the problem of how to obtain nitrogen cheaply and in large quantities. But the food system that developed around it is reaching its limits. Now we need to solve the other half of the equation, producing the foods we need and want with the least amounts of inputs possible. Accelerating the PF disruption can help us do this.

This is Part 5 in our series ‘The Pattern of Disruption’. Part 1 is available here. Or read Part 6, ‘The Shipping Container Disruption Helped End Famines’