As our world leaders prepare to gather at the UN climate conference (COP26) this fall to discuss future action on climate change, there is one major question on the table. Will we as a global society come together to take control of the situation and prevent catastrophic climate change, or are we too far gone?

At RethinkX, we believe the former.

This blog presents a summary of the RethinkX report Rethinking Climate Change by James Arbib, Adam Dorr, and Tony Seba (published on Aug 4, 2021). 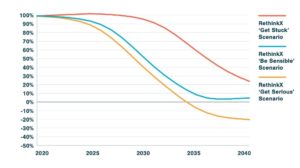 These scenarios are based on the predictable trajectories of unfolding technology disruptions in the energy, transportation, and food sectors, and how key societal choices to accelerate, stall or obstruct these disruptions have crucial implications for greenhouse gas (GHG) emissions pathways. These pathways represent how rapidly we expect these disruptions to translate into a reduction in GHG emissions, combined with the amount of carbon withdrawal we expect to occur.

Our previous research has shown that disruptions of the incumbent carbon-intensive energy, transportation, and food sectors are inevitable within the next two decades. But the implications of these disruptions will depend on societal choices.

The disruptions of the energy, transportation, and food sectors will be driven by fundamental economic factors, but it is possible to either accelerate or delay the disruptions and their associated emissions mitigation with good or bad choices. In short, it will be up to us and our world leaders to decide whether we deploy these technologies worldwide rapidly enough to avoid dangerous climate change.

The Rethinkx scenarios are shown alongside the IPCC’s “Lower-2°C” pathway class that limits peak warming to below 2°C during the entire 21st Century with greater than 66% likelihood. Exceeding this pathway means exposing the planet to serious climate change risk.

Societies choose to embrace rather than resist the disruption of the energy, transportation, and food sectors over the course of the 2020s.

In this scenario, society responds rationally to economic incentives and removes barriers to the deployment and scaling of SWB, A-EVs and TaaS, and PFCA technologies, but critical societal choices are still required. Governments, in particular, can remove barriers to disruption by streamlining market design, breaking up rent-seeking utility monopolies, and ensuring that individuals have the rights to produce energy, transportation, and food services. They can also shut down further subsidies and public investments into doomed incumbent fossil fuel, legacy road transportation, livestock, and commercial fishing industries whose assets will be stranded by the disruptions.

The ‘Be Sensible’ scenario only requires investments that have a positive economic return, and therefore does not include public expenditures on active reforestation or other carbon withdrawal technologies such as ocean alkalinity enhancement (OAE) and direct air carbon capture and storage (DACCS). It does, however, include carbon withdrawal through passive reforestation from the natural recovery of all the land freed up from animal agriculture by the food disruption (2.7 billion hectares) as these withdrawals are costless and inevitable unless that land is actively degraded. 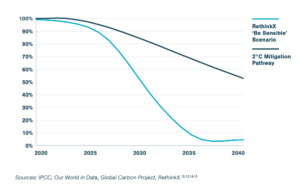 Effortless and costless passive reforestation would offset almost 10% of global emissions annually by 2030, and 20% by 2035 and thereafter.

These two forces together result in a more than 90% decline in net global emissions by 2035.

In this scenario, there is no reliance on non-market emissions offsets (i.e., active reforestation or technology-based carbon withdrawal) that would require government support, and emissions remain below the median IPCC 2°C pathway throughout the entire time period.

Societies choose to get serious and proactively accelerate the disruption of the energy, transportation, and food sectors over the course of the 2020s.

Similar societal choices are made to deploy and scale SWB, A-EVs and TaaS, and PFCA technologies in this scenario as in the ‘Be Sensible’ scenario, but with a more aggressive implementation bringing the timeline forward by 1 year.

In addition, societies also choose to invest in actively reforesting 20% of the land freed up from animal agriculture by the food disruption (with the remaining 80% of freed land undergoing passive reforestation due to natural recovery), as well as deploying other carbon withdrawal technologies such as OAE and DACCS.

Active and passive reforestation together would offset roughly 20% of emissions, or 10 gigatons CO2e carbon per year, from 2035 onward at a cost of $21 billion per year.

Technology-based carbon withdrawal is currently not economically or ecologically feasible. But the combined impact of these three sector disruptions will rapidly change this, allowing them to become commercially viable. Therefore, in this scenario technology-based carbon withdrawal ramps up on an S-curve to eventually reach an annual withdrawal rate equivalent to 20% of 2020 emissions, or 10 gigatons CO2e per year, from 2040 onward at a cost of $44 billion per year.

This effort to block disruption is ultimately futile – the three disruptions will still wipe out incumbent industries based on older technologies and reduce emissions accordingly, but there is a 5-year delay.

The continued existence of incumbent carbon-intensive energy, transportation, and food industries out to 2040 and beyond is simply not plausible. But delays resulting from poor societal choices that resist the new technologies and prop up the incumbencies would cause us to temporarily exceed the median IPCC 2°C pathway, exposing the planet to serious climate change risk. 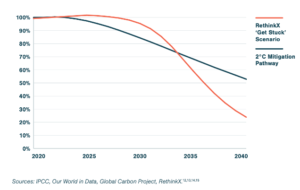 By 2035, emissions will have declined 40% and 75% by 2040 as incumbent industries collapse, but this is unlikely to be sufficient to avoid serious climate change risks.

Emissions exceed the median IPCC 2°C pathway until the mid-2030s, placing humanity within the climate danger zone. Serious carbon withdrawal will be required to recoup the carbon budget lost to overshoot, but the failure to support the three sector disruptions could potentially undermine this as the disruptions are critical to making technology-based carbon withdrawal commercially viable.

Which will come to pass?

The three RethinkX Disruption scenarios illustrate that we can either accelerate the disruptions and solve the climate crisis by ushering in a new era of clean prosperity, or we can waste precious time and trillions of dollars propping up the incumbent system, exposing humanity to additional risk of climate change impacts and economic losses. The choice really is ours, and with COP26 around the corner, the time really is now.

The global governments, NGOs, trade unions, and businesses gathering in Glasgow this fall have the power to change the future. By supporting the clean disruption of energy, transportation, and food, societies can choose to accelerate global greenhouse gas mitigation to reach net-zero emissions before 2040 and lay the groundwork for a complete solution to climate change, simultaneously saving trillions of dollars and improving prosperity and quality of life worldwide.

Our primary efforts should be on enabling economic forces to do the heavy lifting by ensuring open, competitive, and transparent markets that remove barriers favoring the incumbents such as utility monopolies in the energy sector, regulatory hurdles to electric and autonomous vehicles in the transportation sector, and livestock farming subsidies and protections in the food sector.

To maximize the climate benefits of these disruptions, investors, policymakers, civic leaders, and other decision-makers should focus attention and resources in direct proportion to where the fastest and most impactful opportunities for emissions mitigation are located. But to do so, we must escape the confines of the conventional mindset and rethink what is possible through a larger lens that captures the full complexity of disruption.

For over a decade, the RethinkX team has accurately predicted the dramatic cost improvements and market growth of SWB in the energy sector, A-EVs and TaaS in the transportation sector, and PF in the food sector. The approach RethinkX uses, which is based on the Seba Technology Disruption Framework and empirically validated against dozens of historical disruptions since the 19th Century, provides a powerful lens through which to view the full complexity of technology disruptions.