Earlier this week it was announced that the United States Food and Drug Administration (FDA) has declared UPSIDE Foods’ cultured chicken safe to eat. This approval came in the form of a No Questions Letter from the FDA in response to the application for GRAS, or Generally Regarded as Safe, status submitted by UPSIDE Foods.

In the United States, the FDA manages regulatory approvals for ingredients that are going to be entering the food system. They do this primarily through granting GRAS status which indicates that the ingredient is considered safe by experts and therefore exempt from food additive tolerance requirements, a process that can be quite onerous. At any time, the FDA can force an extensive pre-market approval process for the ingredient, release guidance documents preventing their use in food products, or ban the ingredient altogether. Achieving this approval was no easy feat for UPSIDE Foods, they indeed had to endure a very rigorous, multi-year approval process. There are still a couple additional regulatory processes that need to be completed before we see UPSIDE’s cell-based chicken on the shelves, namely work with the U.S Department of Agriculture (USDA), but the general consensus is that those should follow this approval very soon. 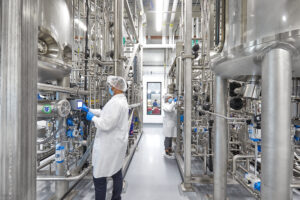 Regulation and the new food system

Regulation and the food system go hand in hand, and rightfully so. Food has a direct relationship with public and personal health, and people must be protected from real threats to safety and any uncertainties with the ingredients in the food they eat, or how those foods are produced.

This decision doesn’t mean that anyone can now sell cultured meat in the U.S., the approval is solely for UPSIDE’s product. However, the shattering of this regulatory hurdle paves the way for other cellular agriculture companies to follow suit.

In a disruption, regulation is often seen as a concrete barrier to adoption – or the reason why something “could never catch on” when radically new and disruptive products are introduced. Barriers, however, are variables not constants and restrictive regulations on the incoming industry tend to fall away as adoption increases, and more is learned about the products.

This is exactly what is happening now. In the past five or so years we have seen several ingredients made by precision fermentation – i.e. Impossible Foods’ heme in 2018, Perfect Day’s whey in 2019, or EVERY Company’s Non-animal soluble egg white protein in 2021 – receive GRAS status from the FDA, and now this is the first made through cellular agriculture. This is significant because while both of these technologies are primarily being used to make novel food products, they are not the same. Precision fermentation, a well-established 40-year-old technology, uses microbes like yeast and bacteria to ‘brew’ single molecules of interest. Cellular agriculture, on the other hand, is novel and involves raising animal (or sometimes, plant) cells outside their organism, to make muscle, fat, or other desired cells. These are important distinctions because while cellular agriculture is part of the disruption of food and agriculture, precision fermentation is the main driving technology.

Adoption and the S-curve 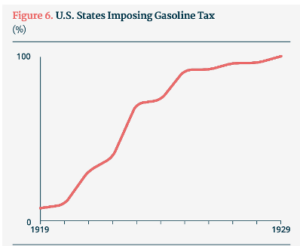 This figure from Rethinking Humanity shows how gasoline taxation grew in response to the disruption of transportation. The first gasoline car appeared in the US in 1893 but still made up less than 5% of the vehicle fleet in 1905 until the disruption took off and reached 95% in 1925. During that same period, the gasoline tax was first introduced in Oregon in February 1919 and within just six years, 91% of U.S. states had adopted it. Within 10 years, every state in the Union taxed gas.

What will we see next?

After UPSIDE Foods earns the rest of their approval, they have said we will begin to see their products in high-end restaurants. This makes sense because cellular agriculture is still very expensive and this is where they could best hope to make a profit. According to the Seba Technology Disruption Framework, this is considered disruption from above. Some new products are both higher-priced and better-performing than incumbents, and therefore they tend to be introduced at the high-end of the market and then target successively more price-conscious segments as the technology is scaled up and moves down the experience curve and therefore becomes cheaper to produce. 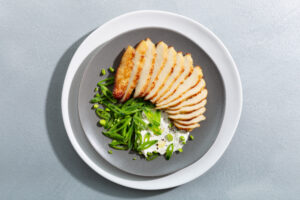 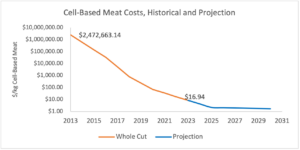 We expect to see the number of FDA GRAS approvals of precision fermented and cell-based ingredients to continue to increase as time goes on and with this, a flood of companies putting their novel food products on the market.

Though we expect the cost of products made with both technologies to decline during this time, it is also clear that in order to support timely market releases at attractive price points, companies will initially mix their ingredients with plant-based products.

This is fully in line with the market-proven business model of the makers of most PF ingredients. PF is used to make key functional proteins and other molecules. Those that will significantly improve the qualities like taste, texture, melty-ness and mouthfeel of the foods they are added to.

In fact, as we said in Rethinking Food and Agriculture (2019),

“This [mixing] is already happening today – the first products on the market are not 100% PF-enhanced burgers, but mixes, such as the 2% heme Impossible Burger. Once costs fall, the Food-as-Software model will ensure that more of the burger will be made with PF. This will be more heme at first, then more protein and more of the fats.”

With cell-based meat, however, the goal has always been to produce complete pieces of tissue meat out of animal-free cells. But cellular agriculture is still a nascent technology that still has kinks to work out before it will be commercially available at any significant scale. Instead of fully cell-based meat, we will likely see a mixture of cell and plant-based ingredients available initially on the market like Eat Just’s cell-based chicken nuggets, which are available commercially in Singapore, and are about 70% meat alongside plant ingredients. Again from 2019’s Rethinking Food and Agriculture, following the previous quotation:

“The first cell-based products, which we believe will hit the market in 2022 before reaching cost parity with conventional ground meat in 2025-26, are likely to follow the same pattern.”

This blog contains a summary of Rethinking Food and Agriculture 2020-2030: The Second Domestication of Plants and Animals, the Disruption of the Cow, and the Collapse of Industrial Livestock Farming (2019) by Tony Seba and Catherine Tubb.